CanCan…Whose Brain is it Anyway?

I’m the kind of person who prefers reverie to focus…but only a little…that is, reverie might be my default mode 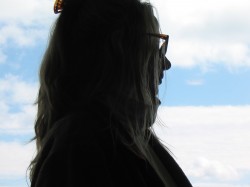 , but when focus kicks in, it is laser like. Maybe I’m a little scared of the power of it. Maybe that’s why I go to the heartbreak place, where there’s no brain left at all, to where I focus like my life depends on it, which it does.
Ahem.

Can you imagine a game that floods you with color and peace?

Are you tired of playing to win? Want to play just to play?

Imagine a game that makes you feel like an artist.

If only there was some activity that could take my mind off all the bad news!

I wish there was an activity that was like a meditation that I could show my kids.

How do I teach my kids how to calm themselves?

How do I calm myself?

What is meditation in action? Is there a tool?

Why do we need to meditate? What good does it do?

What if you could meditate while playing a game?

What if you could create something beautiful without thinking about it?

What if there was an easy way to make something beautiful?

What if there was a creative way to meditate and calm down?

What if there was something you could do that made a beautiful thing and felt as easy as staring out the window?

What if you could play a game and end up calm, and a work of art to show for it?

I wish I had an activity that I could easily lose myself in. 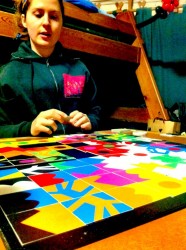 “Brain” stuff is super trendy right now. There are numerous stores, companies, websites, focused on Brain activities. I have submitted CanCan to a couple of these, Mindware 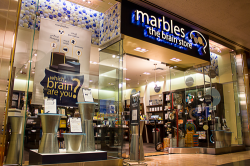 , and been told that we’re not a good fit.
This is such interesting information.
CanCan is definitely a brain game. But it’s not THAT kind of brain game. What they told me a year ago at Marbles, the Brain Store was

“Thank you for taking the time to submit “CanCan” to Marbles, but unfortunately we have decided that it is not the best fit for our stores. This is not to say that your game is bad in any way, just that it does not meet our requirements for products carried by Marbles: The Brain Store. The general feedback we received after thorough playtesting was:

Likes
All the bright colors and patterns on the tiles
The weight of the box and number of pieces – definitely seems worth $32.99
All the possibilities for patterns and final board creation
The easy to learn instructions
Concerns
The number and size of the pieces – it seems that the fun of “CanCan” comes from playing it and building out the final board, but the pieces are so large that it would be hard to demo that build out in-stores, and because we demo every game in our stores, we worry that “CanCan” would not receive the attention it deserves because we would not be able play enough of it with customers.
There’s no “Aha!” moment to “CanCan” – When games have too many pieces to demonstration in-stores, we rely on “Aha!” moments for our Braincoaches to recreate for customers so they can reach an unexpected twist to the game within 20 seconds even without having to play the full game: something that makes the game feel new, different, and (most importantly) better than something that they have already played. We know that’s a lot to ask of a game (and it’s part of the reason we have so few products in our stores), but we have found the strength and timing of the “Aha!” to be the number one prediction of future sales.”
and,

“Thank you for understanding. I know how disappointing it can be when it seems like someone doesn’t like your game, but please know that is not the case here! We playtested your game many times, and I totally understood that the idea was to create and find links between pieces as an artist, and as a fellow artist, I really appreciated and enjoyed that; but unfortunately, placing such an artistic game in our stores next to a game requiring speed, slapping, and pattern recognition, would mean that “CanCan” would not get the attention or love it deserves (which I hope you agree would not be fair to you).”

and my slightly miffed reply

“Thank you much!
I will just cheerfully remind you that the brain has an active side and a receptive side, and I look forward to the day when the two modalities are equally appreciated for their own merits! I strongly believe that games are models of the way we see the world and engage with it, and all that speed and slapping, while interesting and exciting, represents an attitude of engagement that doesn’t fill the whole consciousness bill.”

Let’s just say CanCan is the gentle reminder which emerges slowly, quietly, serenely, beautifully. On its own terms.

This entry was posted in Uncategorized. Bookmark the permalink.